In the early hours of the 28th of April 1944 eight Landing Ship Tanks (LST’s), full of American servicemen were in Lyme Bay, off the coast of Devon, England. Their purpose to take part in Exercise Tiger, the realistic rehearsals for the D-Day landings in Normandy. The night turned into tragedy as a group of patrolling German e-boats discovered and attacked them. At the end of Exercise Tiger 946 American serviceman had lost their lives. 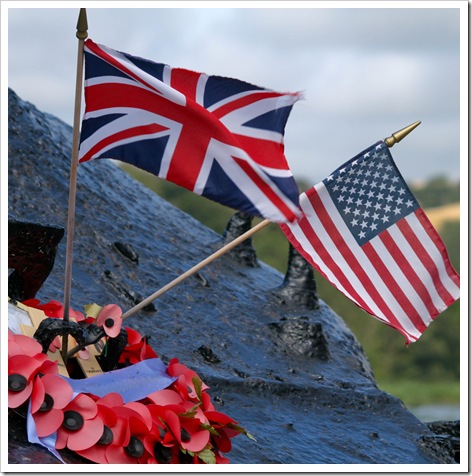 And that is how something as mundane as an empty powdered milk barrel found its way into the Cookworthy Museum in Kingsbridge, it was left in the Trout’s Hotel, which was seconded as an officers mess during the exercise (the whole area was evacuated of civilians; an everyday thing that can only hint at the scale of the operation and its impact on the service men and women and the local population.

The military history of Exercise Tiger can be found here, it was a tragedy,

that was shrouded in secrecy for over 40 years with many of the families of those who died having no idea about what happened (as my mum is fond of saying about WWII, ‘There was a lot we never knew about’.) Then thanks to the exceptional efforts of the late Ken Small, who managed to locate and lift from the seabed a Sherman Tank that had been lost that night and to then dedicate it as a fitting memorial to all those who died.

I think I have to look at this beautiful place in a slightly different light.