I should be carful what I wish for, after the relentless rain, this morning dawned dry and bright, but the light came with a high wind-chill price tag.

I took a trip out to the recycling centre (formerly known as the tip, goodness, I’m a girl that knows how to have a good time!) en-route I paused to admire some fine winter coats.

There was a camouflage version 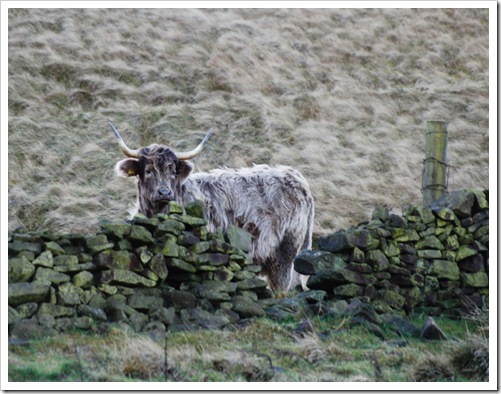 One of the problems of pulling into  field gateways when driving a Land Rover is that, as they are still the farmers vehicle of choice around here, every beast around thinks you bring food*.  I attracted some attention; coming down the hill at speed was the leader of the herd, if it were summer you’d  have described him as gadding. 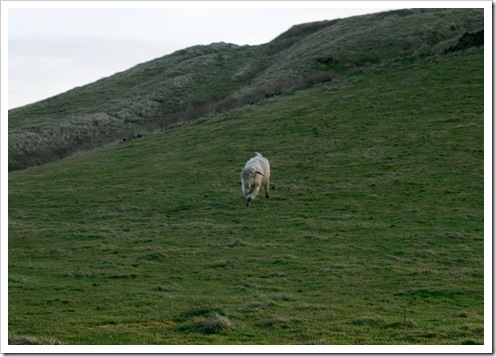 You may notice this photo is not that sharp, sorry, but never mind fiddling with the camera, I wasn’t going to stand the other side of a pile of loosely assembled rocks  with that hurtling towards me, all beef and horns, a steep hill and a muddy field under hoof, I stepped swiftly behind the Landi as he skidded to a halt.

I don’t think there was any malice in him.  See he is rather sweet (I do want to liberate him from under that fringe though maybe he has to run fast to see where he’s going).

Then there was the horse, equally well wrapped up. 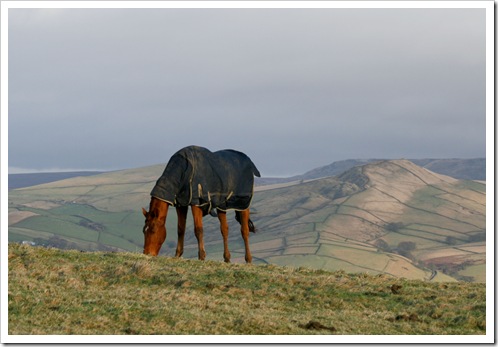 It’s a beautiful spot, but one that gathers the wind, by this time I’d lost, sensation in my fingers, and my hat.

* This has happened before, I once pulled over into a gateway in our old Land Rover  (a Defender 110) to take an important business call. I was immediately surrounded by about thirty heifers all mooing loudly, demanding to be fed. Fortunately the client had a sense of humour and was tolerant of my country ways

15 thoughts on “A Fine Winter Coat”