What I can I tell you, we have snow. Is there any part of the UK that doesn’t have snow? I wonder.

The sheep in the next field seem quite unperturbed

They are fed daily, which seems to make them happy.

It took a wee while to find a sheep that would look me in the eye, as most had their backs to the wind (and wind chill). 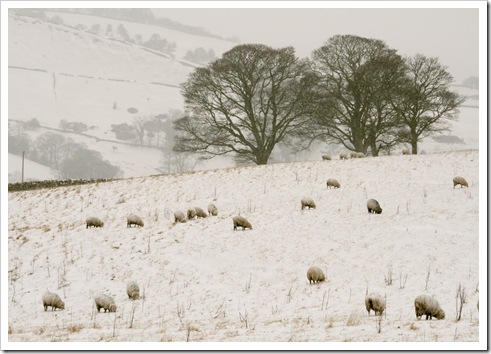 I can vaguely remember a farmer telling me this is how sheep end up stuck in snow drifts, they keep working their way along, keeping the wind behind them, scratting for grass until they run out of field and the snow piles in behind them.

He also told me in the winter of 1963 that whilst many of his flock perished in snow drifts, some were able to survive by eating their own fleece.

But there are people better qualified to comment of sheep and snow, have a look at herdy’s blog, up in Cumbria.

We’ve just watched a cracking little programme on BBC2 about the winter of ‘63 (flighty, it is worth watching on iplayer (Winterwatch)