And what was ‘the norm’ seems  strange and sometimes abhorrent now.  Attitudes to gender, race, class,  the fate of those that were shot at dawn, for cowardice, for what now would have been recognised as shell shock.

Both Mr Uphilldowndale and I have family that were either medical orderlies or medics,  my great uncle is on the far left of this photo, I’m assuming he would have served with the Sherwood Foresters regiment, but I’m not sure. (If any passing reader can tell me anything about when and where this photo was taken, please do, as there is not detail written on the back). 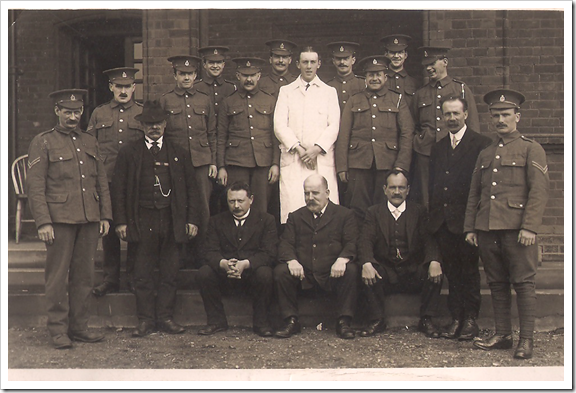 It was when I saw the bunker at Essex Farm Cemetery  that was used as am advanced dressing station the grim reality of the conditions hit me. Confined and claustrophobic,  the stream of catastrophically wounded soldiers that passed under its gas curtain is an unbearable thought.

It is the grim reality that adjacent to the advanced dressing stations were the hastily dug graves, that became the last resting place of many of the casualties. I suppose at least these guys had a marked grave.  Small mercies.

Women weren’t allowed this close to the front, they were further back in the evacuation line, which was all things considered very sophisticated, and necessity being the mother of invention the Great War led to many medical advances that we take for granted today. But at such a cost.

Nurse Nellie Spindler was one of only two women to be killed and buried in Belgium during the Great War, she was a Yorkshire lass.

2 thoughts on “N is for nurse”