More from our travels through New Zealand 2019

Whilst I’d resigned myself to not being able to identify most of the wonderful birds we came across on our trip, and I’d no desire to go to see captive birds, we were agreed it was worthwhile putting some effort into seeing a couple of species we were unlikely to see anywhere else in the world.

Penguins were were in pole position.  We were extremely lucky, whilst on a trip to Doubtful Sound, to see Fiordland Crested  penguinn, look it’s here, in the centre of the photo, sat on a rock, can you see it?

I know, hardly a National Geographic image is it! But never mind, we got a better look with Mr Uphilldowndales binoculars, which were a gift from his employers for 30 years service, and are very useful for seeing into the future. */**

We tried again at Curio Bay. We waited, and waited as dusk fell, but they didn’t show. 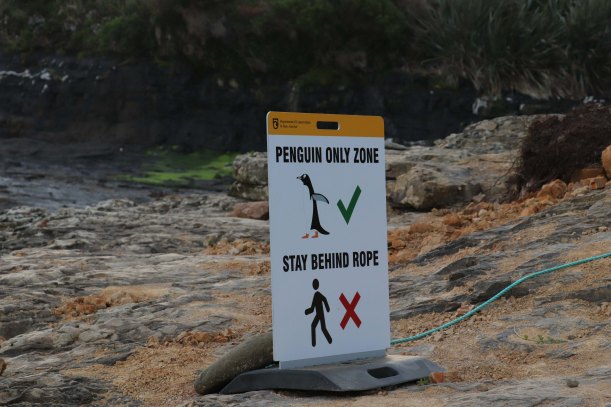 We’d been told that the town of Oamaru  held the best chance to see the Little Blue penguins,

I can’t think about the  little blue penguins  without out this song running on a loop in my head.  Little blue, how do you do.

The town is very proud of its penguins, this ‘green box’ (utility box) made me smile.

The residents look out for their welfare,

(although I was a little alarmed by the speed of the tourist coaches leaving this area, after dusk, when they were still coming ashore)

You can pay to see them from a visitor centre, but we were told we didn’t need to do that.  I got very excited when I saw footprints in the sand.

Down by the waterfront we found one of the penguin wardens, clad in hi-vis vest, they were more than happy to tells us all they knew about their special residents.  And tell us where to wait and how not to disturb them as they waddled back to their nests.

They come ashore in rafts, as in swimming together, not sitting on rafts! The thought of rafts coming ashore does kind of conjure up an image of something slow moving; wrong, they are more like little torpedoes!

It was too dark, to capture much in the way of images, as you can see. But I’m thrilled to say I saw them

And what’s more, a pair were nesting under some decking, very near where we were staying, and I drifted off to sleep that night, listening to their distinctive calls, (starts at 11 seconds)

Which was every bit as magical as the  NZ dawn chorus.

*we forgot to take them out with us 75% of the times we needed them, on the Doubtful Sound trip we remembered them, but forgot the packed lunch!

**At Mr Uphilldowndale’s long service awards dinner, every employee at our table was, like Mr Uphilldowndale, working their notice, having been made redundant. It has to be said though, he’s never looked back.

30 years of employment with the same employer is a thing of the past I guess.