It might have been cold the day we visited Haddon Hall, but at least it was bright. We’ve had some very wet, slag grey days this last week, I doubt we’d have managed to see some of the historic detail had we been there on those days.

The windows at Haddon are beautiful. 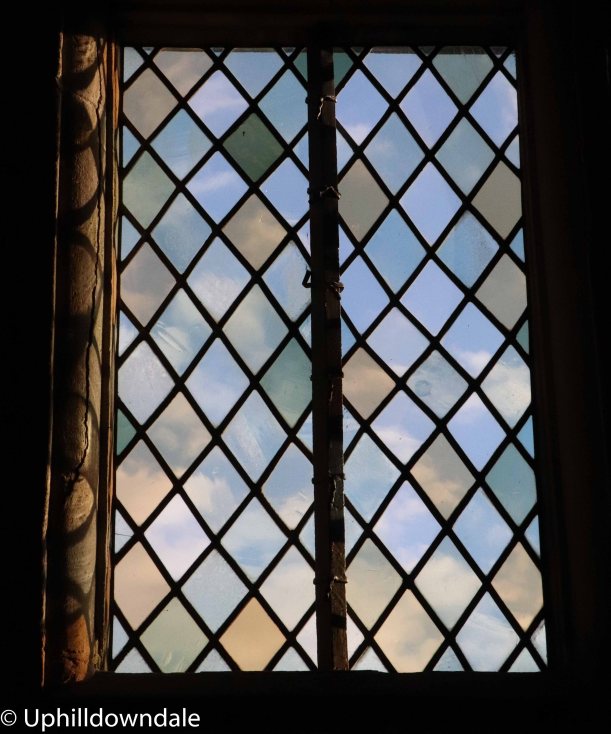 We debated the windows, Mr Uphilldowndale said the undulating waves of glass was a feature designed to add strength, I said it was to make it look sparkly.

During the 19th and early 20th century a great number of important medieval houses were restored and had their windows returned to an earlier style of glazing. The glazing of the western range of Haddon Hall, Derbyshire, is particularly effective as each pane is set at a different angle to those adjacent, creating jewel-like facets when seen from the exterior.

Look at the graffiti,  you’d need to be posh to leave your mark, back in the day, not every one had a precious stone ring, with which to make a statement. 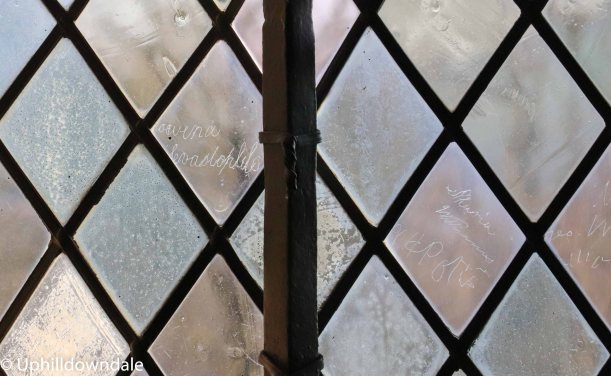 this window tells you what a posh gaff it is.

A very pretty addition to the Christmas decorations was the Wishing Tree, set by the window and bathed in sunlight, it was beautiful in its simplicity 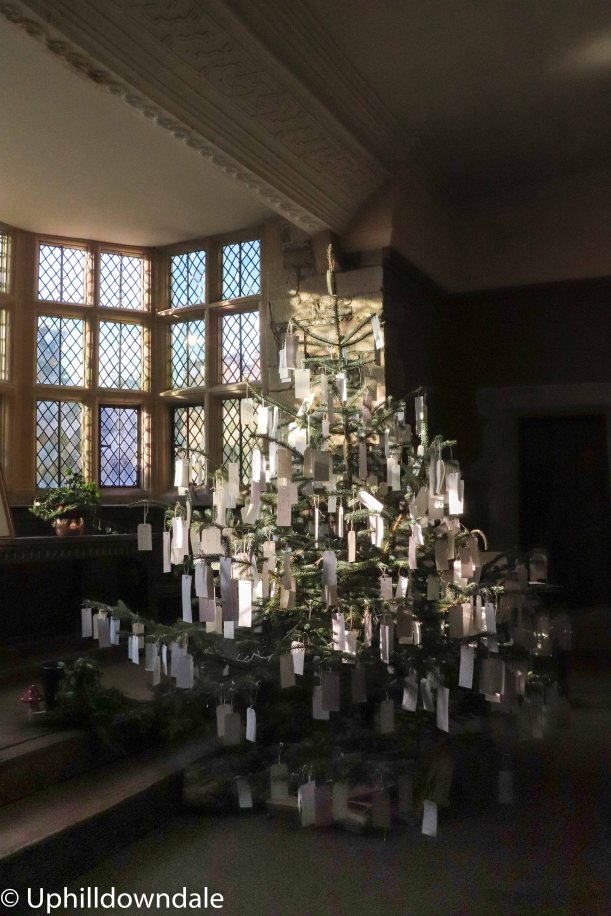 You could add your own wishes if you  wanted too. I guess we all have many things to wish for in 2019,  I for one wish for a little more light and transparency from our world leaders and politicians, is it too much to ask? 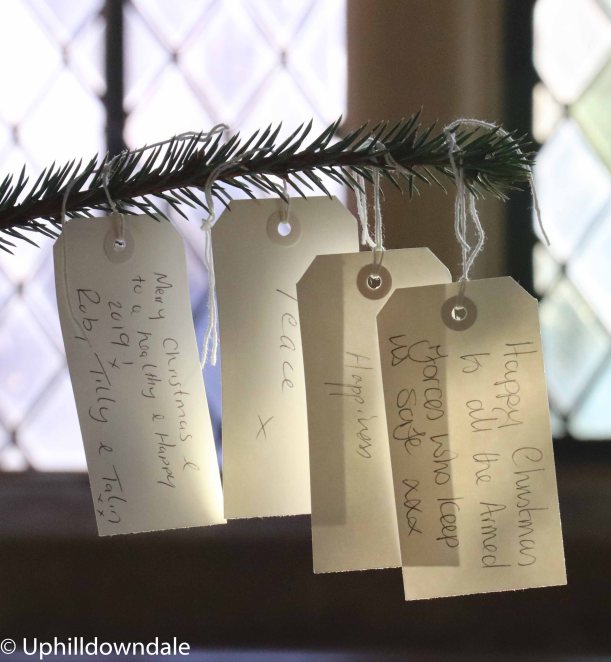 From all the Uphilldowndales, and especially Spud

Who just loves a nice bit of wrapping paper. He’d also like my nomnom chocolate a present from Tom, but he’s not having it. 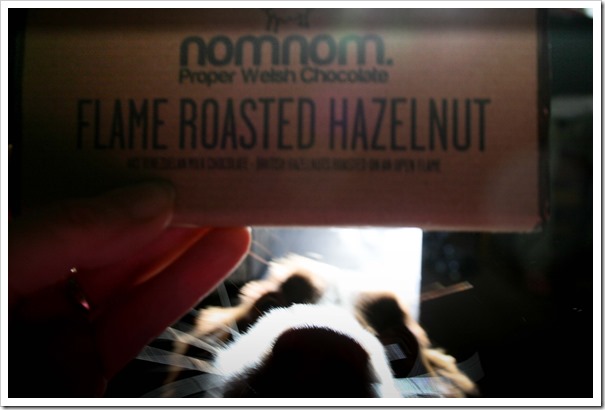 Wishing you peace, health* and happiness.

*judging by how many  search hits I’ve had this last week looking for ‘Mr Muscle sore throat’ I’m hoping those who have cleaned their ovens in preparation for Christmas dinner, are well enough to enjoy their turkey…

Six big sleeps until Tom is home, from his first term at university. I’m very excited.

There will be feasting.

We’ve no sign of frost  here at the moment, a promising  bright morning gave way to a wet and windy afternoon; we’ve lit the fires and opened the chocolates, nobody is moving far or fast.

These images have been waiting in the wings for a couple of weeks.

The holly ( a male,  which is a shame, red berries would have been nice) 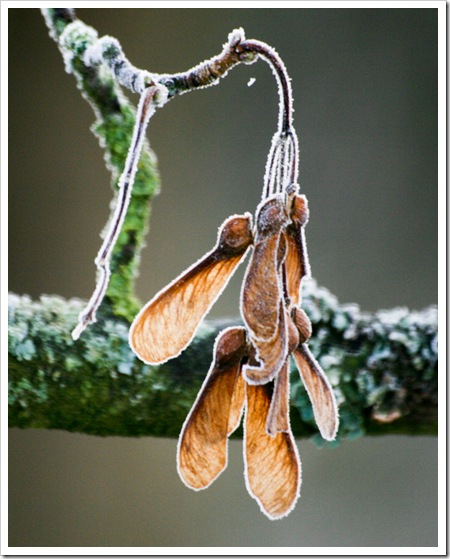 Happy Christmas dear blog buddies, wishing you good health, peace and  happiness for 2013. The uphilldowndales are still here, all is well, but a little exhausting, but once we’ve recovered from the gluttony of Christmas day, blogging service will resume to something  that resembles  my idea of normality.

My blog lies unattended, my RSS feed is bulging at the seams, I’ve been absent without leave yet again. And it going to get worse before it gets better.

Last summer I decreed I was going to have a clear out, the boxes of ‘stuff’ that had come out of the loft the previous year when we had the house reroofed, and that were now languishing in the barn, were going to be sorted once and for all.  Some of the ‘stuff’ might once have been described as bric- a- brac ,  some of it I knew had a value but I didn’t know how to go about selling it; but now thanks to the world of eBay  it is ‘stuff’  that can be  found a new home.

Previously the Uphilldowndales have been shoppers on eBay, not sellers, I can tell you it has been a bit of an adventure and it has taken me six months to actually settle down and ‘just do it’. It has undoubtedly taken up swaths of time, energy and parcel tape*( the village post office is my new best friend). But what has been an unexpected bonus is some of the nice people that I’ve ‘met’ , not unlike the people I’ve met here in the world of blogs actually. I’ve particularly enjoyed hearing why people collect certain things and what make an  item a  ‘good ‘un’ **

I’ve sold things that I  whilst I appreciate the craftsmanship of,  I don’t necessarily want to share my life with. It has been rather cathartic, letting go, sending them off to new loving homes. OK, it has been fun too.

It has made me think what is not for sale too,  what is precious to me, for all sorts of reasons. For starters there are my vintage Christmas tree lights which I now know would sell for a pretty penny) and  then there is what my mum tells me is a ‘bread mug’; a large earthenware bowl, crudely made, a tad on the wobbly side but I’m simply fond of it.

What I love is the hand print in the glaze, made by the person that crafted such a utility item.

Today it has various uses, none involving bread: sometimes it is full of house plants others it might  be home to my most recent collection of fir cones and beach finds, sometimes it hosts only a spider. 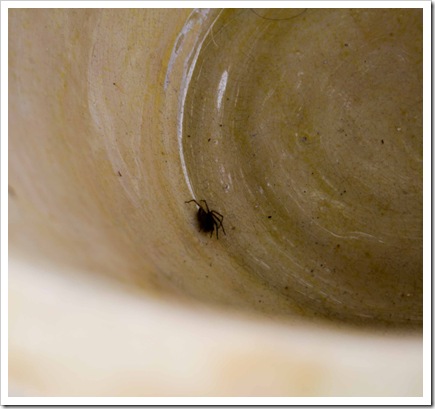 One of the objectives in this mammoth clear out was to fund a new carpet for the lounge. I’ve achieved my goal,  and now I have to put some elbow grease where my money and my mouth is. There is an awful lot of work to be done before the carpet fitter can arrive.

Spud the dog will be along later to hold the blog fort, whilst we replace skirting boards, plaster walls and sweep chimneys. Spud may well have a paint brush tied to his tale.

That post Christmas, over stuffed, lethargic sort of feeling, perfectly captured by a pair of rotund terriers, staked out in the market place, presumably whilst their owners were restocking vittels in the Co-op. 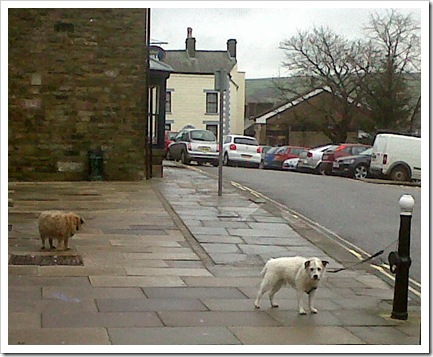 If I’d taken a pin to them they would have popped like balloons and whizzed off over the parish church out to the hills.

Like the rest of the country we are eating up the contents of the fridge, I relish the left overs more than the original Christmas dinner, as it provides a series of ‘easy teas’ with minimum input from me, and that sounds very tasty; but somehow there never seems enough of the right food to hit the spot for teenagers. Despite tins of chocolates, boxes of biscuits littering the house and the remains of a  large dead bird in the fridge, ‘I’m hungry; what’s to eat’ is still the cry reverberating through the house.

The image above is a ‘left over’ photo from our holiday in Wales. It’s of  the  strapping ‘all day breakfast’ at the world famous ‘Pete’s Eats’ in Llanberis. I had a slightly more modest toasted cheese and tuna sandwich and very tasty it was too.

I read the section entitled ‘Pete’s Bistro’ on the  Pete’s Eats website, as a one time self-employed person, it chilled my spine. Brrrrrr

Home the place to be, I’ve got a fire lit, music, even a scented candle for goodness sake* and the for the first time in what seems like a long while, the chance to play about with all things creative. I’m quietly content.

The day got off on the right foot with a sunny start, Spud and I went down  the field to the copse, I wanted to check everything was OK where we buried Dacy the cat. The remaining berries on the Buckthorn caught my eye.

I  planted Buckthorn in the place where we’ve chosen bury our pets, for very sentimental reasons.

As a child my Dad always used to dose the dogs, we had Border terriers, with syrup of buckthorn if they were unwell. I’m not sure it was the right thing,  it was probably a very antiquated idea even in the 1960’s; from 1891 the Lewis Lloyd collection

Jalap "consists of the dried tubercules of Ipomoea Purga, Hayne (N.O. Convolvulaceae), a climbing plant indigenous to the eastern slopes of the Mexican Andes." (The British Pharmaceutical Codex, 1911). It was used (in humans) as a purgative, as was Buckthorn syrup (The Physiomedical Dispensatory, William Cook, MD, 1869).

But there worse things to give a dog, see the prescription for distemper

½ oz White Hellebore
½ oz Black Brimstone
1 Pint of old milk (1 quart for a very small dog), mix together and sponge the dog well all over (particularly the chest and underneath parts). Shut the dog up in a warm place, it makes him very sick and purged for some hours – when recovered sufficiently feed for the first 24 hours on slops and no meat, afterwards keep him well. Tho’ the hellebore is poison, dog need not be muzzled. The above is a capital dressing for Sporting dogs once a month during the summer and hot weather."

*The candle is very nice, so much so, that Mr Uphdd, who is not a fan of such things does not protest, it’s by Neom,  and if you wanted to buy buckthorn hedging  plants, I’d recommend the very nice people at Weasdale nurseries  their fine plants have featured here before

Spud would like to wish his world wide fan base, a very Happy Christmas,

may it be cosy and relaxed. 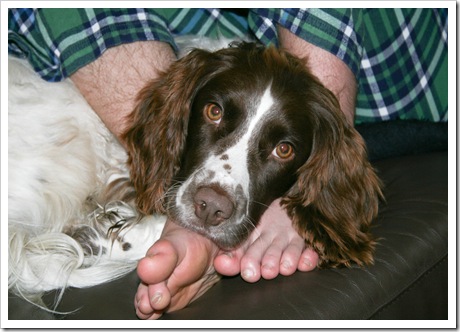 Peace and goodwill to you all.

I can report Mr Uphilldowndale finished the decorating at 18:00 hrs yesterday evening. Dinner will be served.