It was a case of no snow, not the wrong kind of snow.

Out and about this week I came across this gentleman, with a nifty way of getting about.

He is in training for a 50m cross country ski race in France, to build up his stamina he goes out like this one day and runs the next, It was very kind of him to explain, he was a bit out of breath as he had just ‘skied’ up this hill, (my kind of skiing has always been of the ‘down hill only’ variety and included lots of stops for hot chocolate.) 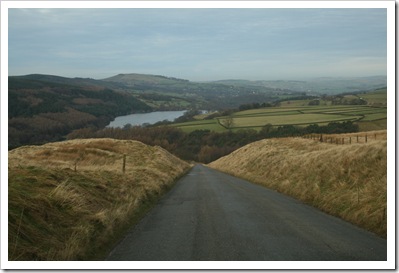 The hills gradient is 1:7 and what is now road was once a railway track, with a stationary steam engine at the summit, the engine was used to haul the trucks up the incline, it was built in 1831, to link two canal systems. Could I get up that hill in these shoes? I don’t think so!

But I have to say this is a wicked hill to sledge down, especially on either a plastic bivvy bag or a fertiliser sack, I know I have done it and Tom found it rather an exciting run on his mountain bike, in what was not a totally controlled decent, it was miraculous that both he and the bike arrived at and got round the bend at the bottom together.