A selvedge of snow still remains, banked up against the drystone walls, it lies in dips and gullies (or ‘gips’ as I used to call them as a child, no point wasting words when you can blend).

There are lanes  that are still full to the brim, some with cars still entombed! Our lane was cleared  of snow this afternoon, by man in a JCB digger.

Tom has returned home from a geography study trip to Iceland*, it has been warmer there all the time he’s been away than it has here. How silly is that.  On his return he said how ‘green’ everything looks at home, but this is only in comparison to Iceland, not ‘as it should be’, at this time of year, in this part of of the world. It is dire for livestock.

Here are Joe and Spud on our walk on Sunday 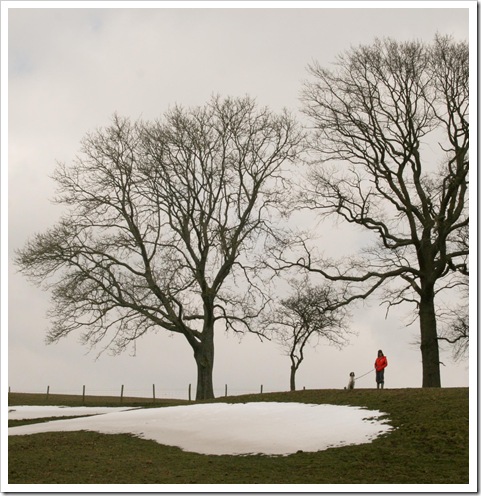 Mr Uphilldowndale wanted to show me some mine workings that have ‘opened up’ recently: as a child I used to play no more than a stones throw from here.

My Mum has said for over fifty years that she is convinced the loud crash she and a friend heard one summers evening could only have been to do with the old  mine workings, of which there are many around and about, both coal and lead.  It’s not really what you want at the bottom of the garden.

Making them safe is the remit of The Coal Authority.

* I’ve been envious of Tom, I went to Iceland in the early 1980’s with my friend Bob’s-mum; it seemed a bit off beat for a holiday destination back then. I loved it, however unlike Tom, I didn’t get to swim in The Blue Lagoon, or see the Aurora Borealis… sigh.

11 thoughts on “Land of Snow and Ice”