You may remember a few weeks ago a courier was so inspired by the view from our doorstep that he took to quoting Churchill? Well today I took deliver of a new mattress for Tom’s bed, after the two guys had hauled the thing upstairs for me (and lugged the old one back downstairs, so they could take it way with them, how useful a service is that?!) They too paused to take in the view. 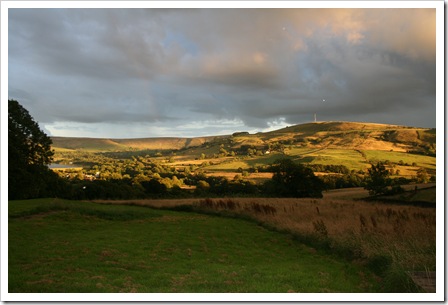 ‘You could never tire of looking at that view’ said one.

‘The last guy that made a delivery here’ I told him ‘said that this view was was what Churchill was talking about when he said ‘we will fight them on the beaches.’

‘Humm’, said the other one thoughtfully, ‘if Churchill said that, who said ‘Defeat is bad?’ 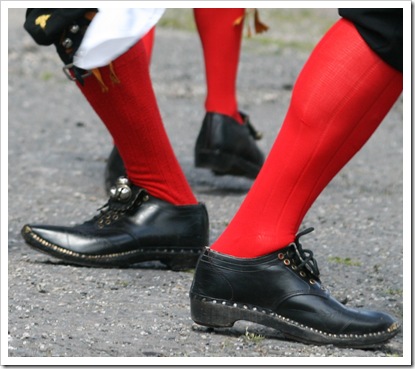 As it’s the Summer Solstice today, a post that shrieks summer (and the  drinking of draught bitter)  you can read more about Morris dancing here or watch some dancing over there, 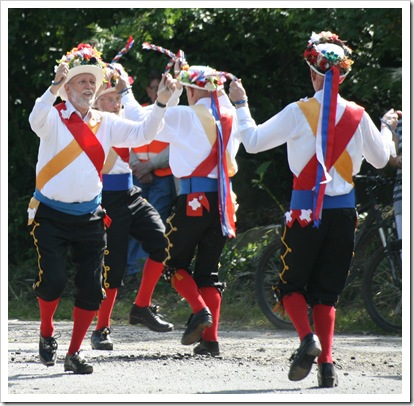 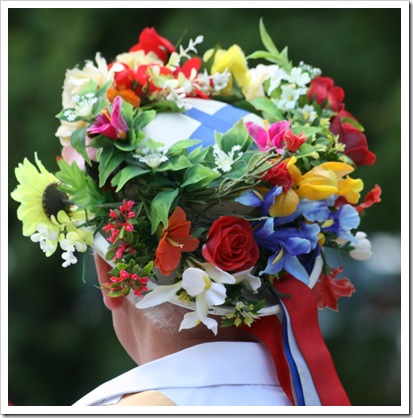 I’ve read that Morris dancing is in danger of extinction, however this little girl was showing future potential, dancing just like  her grandpa

I quite fancy owning a pair of clogs, its the sound of the clog irons I like, I think it goes way back, to the child in me, and I must have been less than five, I used to  love shuffling round the kitchen in my mums shoes because I like the clicky klacky sound they made on the quarry tile floor, not sure about the bells though. 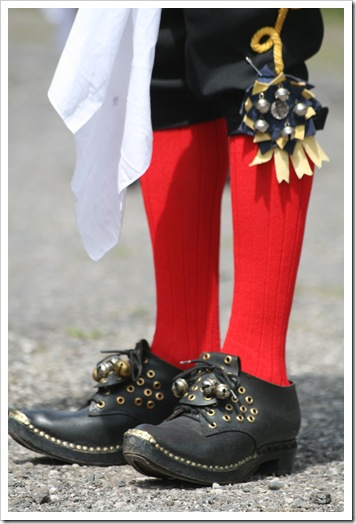 As well as fathers day (Mr Uhdd is not around for that, he’s got other things on his mind, The Three Peaks Yacht Race is under way) apparently it is Naked Hiking day, I’d seriously suggest you don’t try that around here, as the nettles are thigh high at the moment, the farms dogs are nippy and the locals would not be friendly, but if you want to see what it is all about. But don’t say I didn’t warn you.

When I was in the yard this morning, I thought I heard the phut, phut, phut of a quad bike coming across the fields, I was wrong, it was the sound of amphibian activity in the pond. Mr Froggy has gone a courting 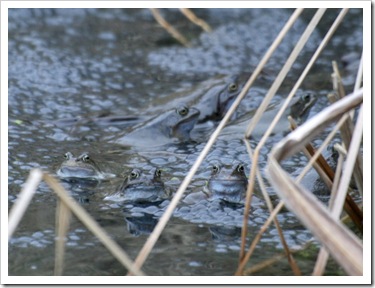 The light was pretty dull and dismal this morning, but I’m sure there will be plenty of photo opportunities over the next few weeks; there was last year, and I didn’t have a long lens then, so Mr Frog and Mr Toad (and maybe even the odd newt, we’ve never seen any newts  but we have ‘local intelligence’ that they are around here) show me your best side, the World Wide Web is waiting.

It’s 20 years this month since the ‘birth’ the WWW, I don’t imagine Tim Berners-Lee had garden ponds in mind at the time

My friend is growing lots of different seed potatoes, she grows all sorts of organic vegetables and she keeps bees (I’m hoping one day to pluck up courage and go and photograph them, truth be told I am rather nervous of bees and wasps, I don’t have a very good reaction to insect stings.) 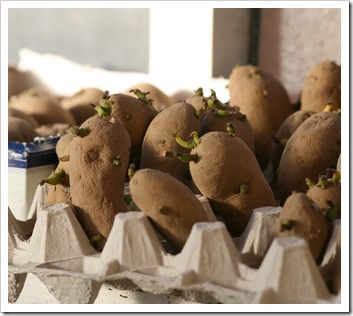 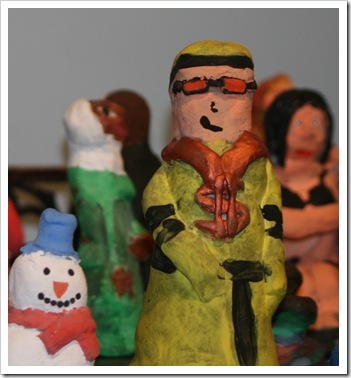 (come on keep up!) They were an art project at Joe’s school last year, 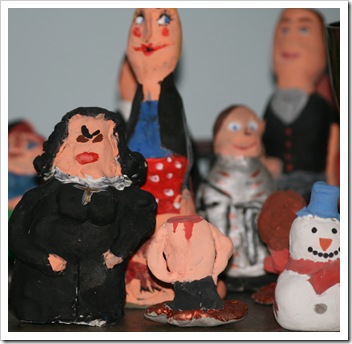 looking at the few snatched shots that I’ve got, I regret not loitering and having a closer look, there are some super characters in the crowd 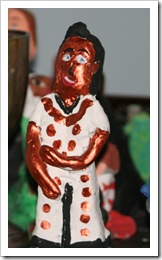 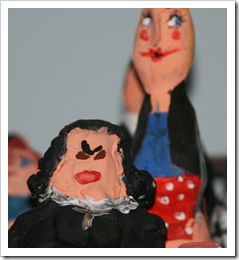 Mr Uhdd and Tom were looking over my shoulder as I wrote this post and they said I needed to go here, (Gerry, you’ll need broadband for this)

They were right, now try the speeded up version.

So just how did we get here from a seed potato?

I’m not sure what the tally is, but our cat has been using up his nine lives; regular readers have met Dandy the cat before, 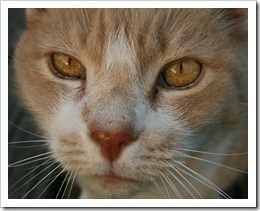 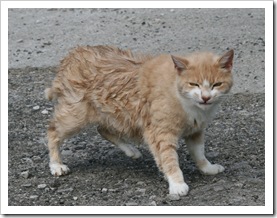 He’s always shown a preference for drinking spring water from the pond, rather than tap water, so when I spotted paw print on the ice the other day 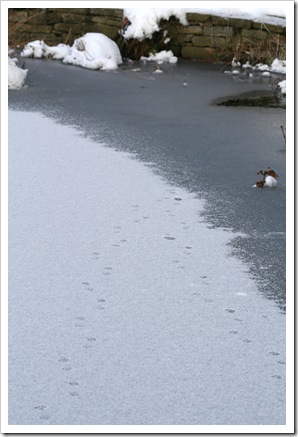 I had my suspicions that they were his. This morning when I came down,  I found a distressed and soggy cat sat on top of the central heating boiler, it seemed obvious what had happened, a look at the pond confirmed my fears, that at some stage during the night he had fallen through the ice. 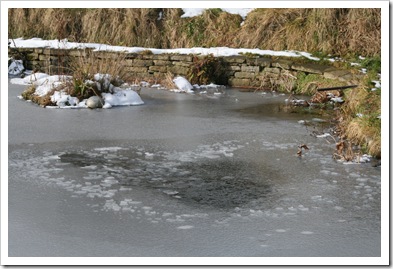 We can’t help but think he was very lucky to have managed to get out; before the sun melted the snow on the bank, you could see exactly where he had hauled himself out. One lucky cat; at 13 years of age you’d think he’d have a bit more sense.

This cat has made us all laugh

That other sunrises just can’t reach.

If you are a little bird and it’s been a very long and very cold night, the warmth of the morning sun must be very welcome 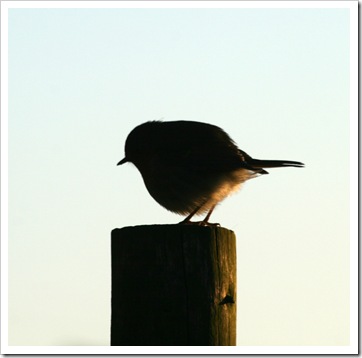 I find it hard to imagine our landscape without drystone walls 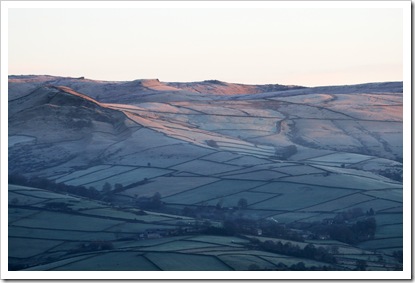 This shot, as the morning sun catches the tops of the hills on a frosty morning.

It’s not been as clear as this today, the day has been shrouded in low cloud, visibility has been poor and the temperature has never come above freezing; it’s about -3 Celsius this evening . The farmers are taking advantage of the frozen ground are out muck spreading with vigour, (the frozen ground means that the tractors tyres doesn’t churn the soil into deep ruts and the freeze thaw action will help breakdown the muck.) But if you really want to know all the facts about muck spreading physics…..

‘centrifugal spreading is a very important step in precision agriculture.’

We’re in that odd no man’s land between Christmas and New Year, who and what is and isn’t working is all a bit of a mystery, the farmers are, because they always are (but the agricultural merchants were closed today when I went to buy some hen feed) The building and construction industries usually shut down for two weeks over Christmas and New Year, but uncharacteristically I’ve seen lots of builders busy at their work in the last couple of days, maybe they are just thankful with the financial climate as it is, to grab any work that’s around at the moment, a bird in the hand being worth two in the bush (but then builders merchants was closed when I went to buy two handles for the kitchen units)

But the butchers was open and venison is on the menu for tomorrow night.

(I’ve just re- read what I’ve written, this post is indeed aptly titled, it is  a patchwork or a total mish mash of topics!) 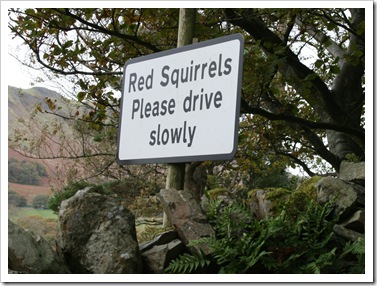 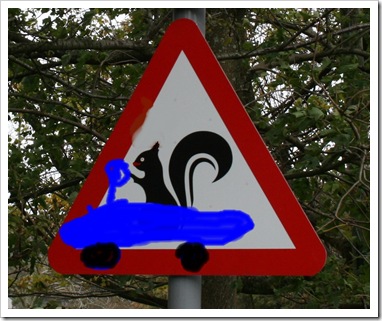 In spite of repeated warnings the squirrels have continued to use excess speed.The only answer has been to confiscate the offending vehicle 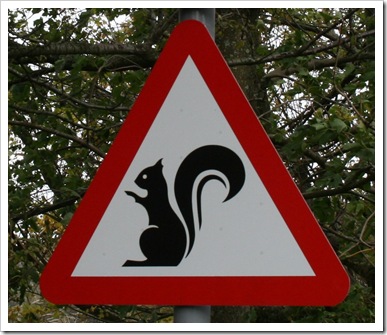 Best get back up the trees guy’s, over at River Cottage they have been cooking up

When it comes to getting the message across, it’s not what you say, but the way that you say it. 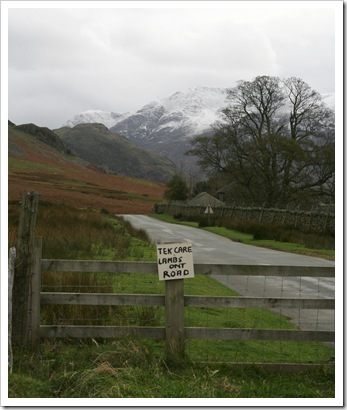 What’s in your biscuit tin; a metaphor for life. 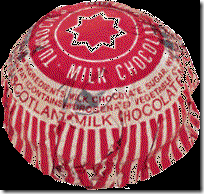 I rang Mr Uhdd on his mobile, I wasn’t really expecting him to answer, as I knew he was ‘on a course’, my plan was to leave a message, but to my surprise he answered with ‘Oh I’m glad you’ve rung, I’ve got to do this ‘thing.’  ‘What sort of thing?’ I asked. ‘Well’ he continued  ‘if you were a biscuit what sort of biscuit would you be?’  ‘Oh that’s easy’ I replied ‘I’d be a Ginger Nut.’  There followed a perplexed silence (if a silence can be perplexed) ‘Oh I don’t know what to put down…. and how do you know what sort of biscuit you are?’ I have to say there is no short answer to such a question, other than to say I’ve done a lot of research: for the record, I have not yet found out if I am married to a Garibaldi or a Tunnocks Teacake, you would think after all these years, that I would know, but I don’t, Mr Uhdd is keeping the lid on the tin.

So dear reader, if you were a biscuit what sort biscuit would you be? go on tell us; you don’t have to tell us why you can identify with any particular brand, but if you don’t  tell, we will draw our own conclusions.

I’ll go and put the kettle on.

(if you seek inspiration look here.)

Stuck in Sydney and posting old photos I've taken with various camera phones over the years. To make it more interesting, now in Black and White with sarcastic commentary.